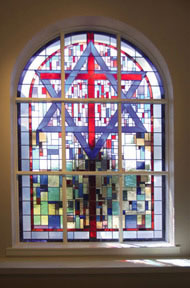 Because of their love for each other and their love for Ole Miss, Rose Marie Leonard of Kosciusko, Mississippi, and Henry Paris of Lexington, Mississippi, chose to be married at the Delta Gamma House on the Ole Miss campus. Rose Marie’s grandfather, Charles Henry Leonard, met his wife, Mary Comfort (a founder of Delta Gamma in Oxford) in the 1870s. What better setting could there be for this marriage between Rose Marie, so richly entwined in the soul of Ole Miss, and Henry, an Ole Miss cheerleader who was chosen by his peers as Colonel Rebel and placed in the University Hall of Fame?

As Rose Marie and Henry were joined in marriage, so too were their faiths joined in a family that was to see their legacy at the University continue in the lives of their children: LeRoy Henry Paris II ’79 and ’82, Irma Leonard Paris Harlow ’81, and Rachel Paris Causey ’88, and their children’s spouses: Lisa Redditt Paris ’82, A.E. “Rusty” Harlow, Jr. ’86, and Arthur Kendall Causey, Jr. ’96.

The passionate commitment to build a chapel at the University has been a dream of the Paris family since 1976, when Henry was appointed to the Chapel Committee by Chancellor Porter Fortune. The lead gift for the chapel is from the Paris family, and Lee Paris assumed the leadership role in organizing the effort to attract the additional funding needed to complete the chapel.

A Star of David together with a cross serves as a symbol of the union between the faiths of Judaism and Christianity represented by the union of Mr. and Mrs. Henry Paris. This symbol is found on the stained glass window on the front of the Paris-Yates Chapel, which is available to the Ole Miss family for prayer, meditation, worship, and perhaps another wedding for one of Henry and Rose’s nine grandchildren. If indeed this destiny is fulfilled, it will continue the family’s five generations of being a part of the Ole Miss family.