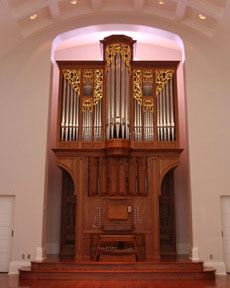 When the University’s new chapel was conceived and planned, it quickly became obvious that this new space would be the perfect setting for a pipe organ of traditional design, an instrument that would be built on classical principles,would be flexible enough to play a large and varied repertory of solos and accompaniment, and would embody the University’s commitment to quality and artistic integrity in a beautiful and unique instrument that may last a century or more into the future.

A classic pipe organ is based on historical principles that reached their highest stage in Europe around 1700, when the organ was arguably the most complex machine in existence. It consists of several divisions, each with its own pipes, windchest, and sound-enhancing wooden case, and each controlled by its own keyboard through a direct mechanical linkage. The divisions are not scattered around the room, or hidden away in chambers, but are mounted in a free-standing case, along with the bellows that supplies wind to the pipes.

It was fortunate that a master builder was chosen early enough to collaborate with the architect on the tonal conception of the chapel. A pipe organ relies for its musical effect on the acoustics of the space in which it stands; its aural and visual prominence demands that it be included in the architectural design of the space that will house it. An organ of classical design demands hard, reflective interior surfaces, yet with sufficient moldings and openings to avoid undue concentration of sound at focal points. This is precisely the kind of space planned by the architect, a classical basilica plan consisting of a high, narrow nave with side aisles. The organ itself is located at the east end, where the sound will project optimally along the central axis of the building.

Karl Wilhelm, the builder of the organ, was trained in Germany and Switzerland before he settled in Canada, where he established his shop in 1966. Since then, he has become one of the most respected builders in North America, specializing in mechanical action organs designed according to classic tonal principles. The chapel organ has two manual and one pedal division. It consists of 26 stops comprising 32 ranks, 1642 pipes in all, giving it a volume and tonal variety that are quite generous for a building of this size. Dr. Warren Hutton, of the University of Alabama, served as consultant on the project. The organ itself was purchased through the generosity of Gene L. Davidson and family of Tallahassee, Florida, and of Sandra and W.B. Johnson of Atlanta, in honor of Larry and Susan Martindale.

The dedication of the Paris-Yates Chapel took place on Saturday, April 28, 2001, and included music on the Peddle Carillon. Following the outdoor ceremony, visitors toured the chapel and heard the organ for the first time, demonstrated by Warren Steel and students Andris Rozukalns and Sarah Weston. The organ was formally dedicated on October 19, 2001, during homecoming festivities, with a recital by renowned organ soloist Jeff McLelland of Birmingham, Alabama.