The Chapel at Ole Miss 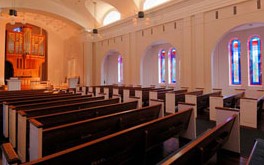 In 1975, students chose the chapel as their charitable project and, with the help of alumni, raised $12,000 for a Chapel Fund. In 1976, Chancellor Porter L. Fortune, Jr., appointed a committee to develop plans for an Ole Miss chapel. Chancellor Fortune charged the committee with recommending the type of chapel desired and possible sites for its location.

The committee expressed a desire to build a “traditional chapel” that would be centrally located and defined its principal function as a “setting for interdenominational worship services and rooms for prayer, meditation, Bible study, small discussion groups, counseling, and weddings.”

In May 1977, the committee submitted a final report to Chancellor Fortune. In December 1977, Dr. Fortune announced the beginning of a $500,000 chapel fund-raising campaign, proclaiming December 7 as “A Day of Prayer” on campus for the realization of a chapel at Ole Miss. But it would be many years before the chapel would materialize.

A building committee was appointed in 1978, and in the mid-1980s an effort was made to revive the chapel initiative, but private support was not available.

After being named chancellor in 1995, Dr. Robert C. Khayat was approached by three alumni committed to funding a chapel: Henry Paris, a member of the original 1976 chapel committee; his son, LeRoy H. Paris II; and J. Stacy Davidson. With the commitment of a lead gift, Chancellor Khayat appointed a new Chapel Committee in February 1996. The mall area west of the J.D. Williams Library was chosen as the site for the chapel, and symbolic groundbreaking ceremonies were held September 14, 1996. Subsequently, another lead gift was provided by Bill and Nancy Yates and family.

Since all of the costs of the Paris-Yates Chapel and Peddle Bell Tower are from private gifts, construction of the Chapel has been a project of The University of Mississippi Foundation. The Board of Directors of The University of Mississippi Foundation formally voted to move forward with construction at its meeting on April 23,1999.

The new chapel for The University of Mississippi was programmed and designed by Dale and Associates Architects, P.A., of Jackson, Mississippi, and is being constructed by W.G. Yates & Sons Construction Company of Philadelphia, Mississippi. Developed concurrently with a new quadrangle west of the Library, the Chapel includes a 200-seat sanctuary and a bell tower provided by the Peddle family of Oxford. The Verdin Company of Cincinnati is the manufacturer of the carillon, with 36 bronze bells cast in Holland. The carillon will chime the hour and play appropriate melodies. The Chapel also houses a magnificent pipe organ handmade by Karl Wilhelm, Inc., of Canada. The organ is made possible by the generosity of Gene L. Davidson Family and Sandra and Bill Johnson in honor of Larry and Susan Martindale. The Chapel garden’s statue was sculpted by artist Rod Moorhead through the generosity of James F. and Peggy H. Adams. The architecture and materials of the chapel maintain the strong, traditional environment that is so important to The University of Mississippi.

History of the Chapel Effort

For 150 years, The University of Mississippi has provided the state of Mississippi, the South, and our world a legacy of leadership, enlightening the minds of thousands of students who have collectively shaped our history. To maintain that tradition, the University seeks to provide an open, stimulating, and challenging environment in which students develop mentally, physically, and spiritually. The Paris-Yates Chapel is a place set aside for spiritual development. Here students have a quiet place for prayer, meditation, and worship in the heart of a busy university campus. The Chapel symbolizes the importance of spiritual development and the University’s desire to provide a complete education for our students.

The Paris-Yates Chapel provides a spiritual home on our campus where members of the Ole Miss family may seek peace, guidance, trust, and wisdom, equipping them for leadership in Mississippi and our world in the 21st century.